Welcome to our Blog. Read all about it here. 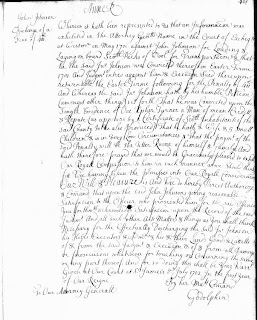 A Canadian member of the Johnson family of Steyning has sent us copies of a fascinating pair of documents. The first lists one John Johnson, Master Tanner, on a March 1702 record of Treasury Warrants as petitioning:

“for relief from the fine of £415 imposed on him last Easter term (by the sole evidence of Christopher Turner) for transporting wool to France”.

The second is a copy of the original letter, handwritten “by her Majesty’s Command” and signed Godolphin. There is what appears at the top of this letter to be the signature of “Anne R”. It is a lengthy letter which records that John Johnson had been convicted of:

“loading and laying on board several packs of wool for transportation”

It goes on to state:

“Whereas the said J’no Johnson hath by his humble peticon set forth that he was convicted upon the single evidence of one C’pher Turner, a man of mean creditt and repute (as appears by a certificate of sev’ll inhabitantes of the said county to us also produced) that he hath a wife and five small children and is in very low circumstances and that the paym’t of the said penalty will be the utter ruine of himself and family and hath therefore prayed that we would be graciously pleased to extend our Our Royale Compassion to him in such manner as we should think fit. We having taken the premisses into Our Royale Consideration. Our Will and Pleasure is and Wee do hereby Direct Authorize and Comand that upon the said John Johnson giving reasonable satsfaicon to the Officer who prosecuted him for the said offence thro’ly acknowledge satisfaicon upon the record of the said judgm’t and all such other acts matters and things as you shall think necessary for the effectually discharging the said J’no Johnson his executors ... from the said judgm’t and execucon and of and from all damage or any part thereof and for so doing this shall be your Warr’t Given at Our Court at St James’s 8th July 1702 in the first year of Our Reigne.”

The enormous fine imposed and the manner of Queen Anne’s apparently personal response to his petition for leniency makes this a highly unusual situation and one that we are very glad to record within our archives.

Email ThisBlogThis!Share to TwitterShare to FacebookShare to Pinterest
Labels: Johnson

Find out all about us at:
steyningmuseum.org.uk